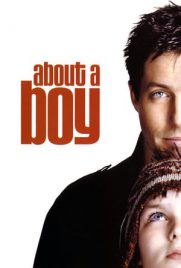 Director : Chris Weitz , Paul Weitz
Writers : Nick Hornby, Peter Hedges, Chris Weitz, Paul Weitz
Stars : Nicholas Hoult , Toni Collette , Hugh Grant , Sharon Small
Summary of the film About a Boy 2002: Will Freeman was a Londoner who one day discovered that his friends were involved in their marital responsibilities and left him alone in the cold. As time goes by, as a father, he begins to meet a string of single parents who trust in his ability to leave them when they begin to make a commitment. But Will's hope of staying single while meeting 12-year-old Marcus,