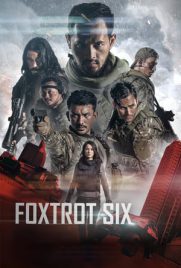 Director : Randy Korompis
Writers : Randy Korompis
Stars : Arifin Putra , Oka Antara , Julie Estelle , Verdi Solaiman
Foxtrot Six 2019: Climate Change is Transforming the Global Economy. With the destruction of food products and prices, food has replaced oil as the most valuable commodity. Among the few lands that are still fertile, Indonesia is rapidly rising as the next economic superpower, when its government is abruptly and brutally overtaken by a popular political party. Within three days, the six former Marines must work together to find their lost brotherhood, stop genocide across the country, and millions