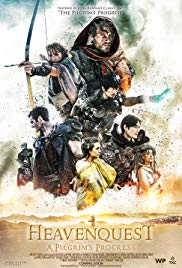 A regal man named Vangel is thrust on a journey against his will when he is mysteriously arrested and begins to have strange visions of a woman in white. Armed with an ancient book that he receives from a wise sage, his adventure begins.
Director: Matt Bilen
Writers: Matt Bilen (story), Dan Mark (screenplay) | 3 more credits »
Stars: Patrick Thompson, Peta Sergeant, Alan Powell